Talking Can Save Lives: Haredi Women and the Injury of Shame

JERUSALEM– Tzyppil Yron breathed heavily as she made her way up the steep hills of the Geula neighborhood.  Men and women walked past on their way to work and Torah study, carrying, pushing, or trailed by their modestly dressed children.

Women like Yron raise families that average six children and work full-time so their husbands can study Torah at yeshivas, schools dedicated to religious texts.  They are the heart of Israel’s ultra-Orthodox Haredi community.

“When I support my husband I have some of what he is doing,” said Yron, a mother of two who writes for the Orthodox magazine Mishpacha or Family.  “Spiritually we have the same merit.”

After the Holocaust, the Haredim in Jerusalem committed themselves to increasing their numbers and passing on Jewish law to the next generation.  But while Haredi women may have spiritual clout, they lack economic power, political representation, and access to education.

“Women are disproportionately the victims in a religious state,” said Rachel Stomel of the Center for Women’s Justice, an organization that advocates for women’s rights within the male-dominated rabbinic justice system.

Haredi women suffer a 30 percent higher mortality rate from breast cancer than their non-Haredi counterparts, and advocates like Stomel point to the taboo surrounding women’s bodies as a major contributing factor.  It is also considered shameful to speak about physical and sexual abuse among Haredim, so cases go unreported and women do not tap into the resources at their disposal.  Words like “sex,” “rape,” even “breast” are considered non-religious, and therefore not fit to print in newspapers or on pashkevilim, the black and white posters taped to the walls of Haredi streets.  This culture of silence puts Haredi women’s bodies and mental health at stake, advocates say.

A group of community activists is challenging these taboos.  They curate social media pages and lead local organizations where it is safe to speak about women’s health and safety.  It’s an inside job.  Anything else would be ineffective in such a tight-knit, tight-lipped community.

Fleishman is a co-founder of “Lo Tishtok” or “Thou Shall Not Be Silent,” which began as a volunteer-run Facebook group for victims of sexual abuse.

Survivors privately send their stories to Fleishman who then posts them anonymously to the group.  Messages are often about the silence in the community rather than the abuse itself.  The group, which has more than 12,300 likes, offers a safe space to share resources and offer support.

“We are trying to convince people that abuse is not sex,” said Fleishman, who aims to break the stigma within the Haredi community.

Still, many Haredi do not use social media and rely on pashkevilim.  Victims of abuse and women with breast cancer are unlikely to find relevant information on the walls of Guela. 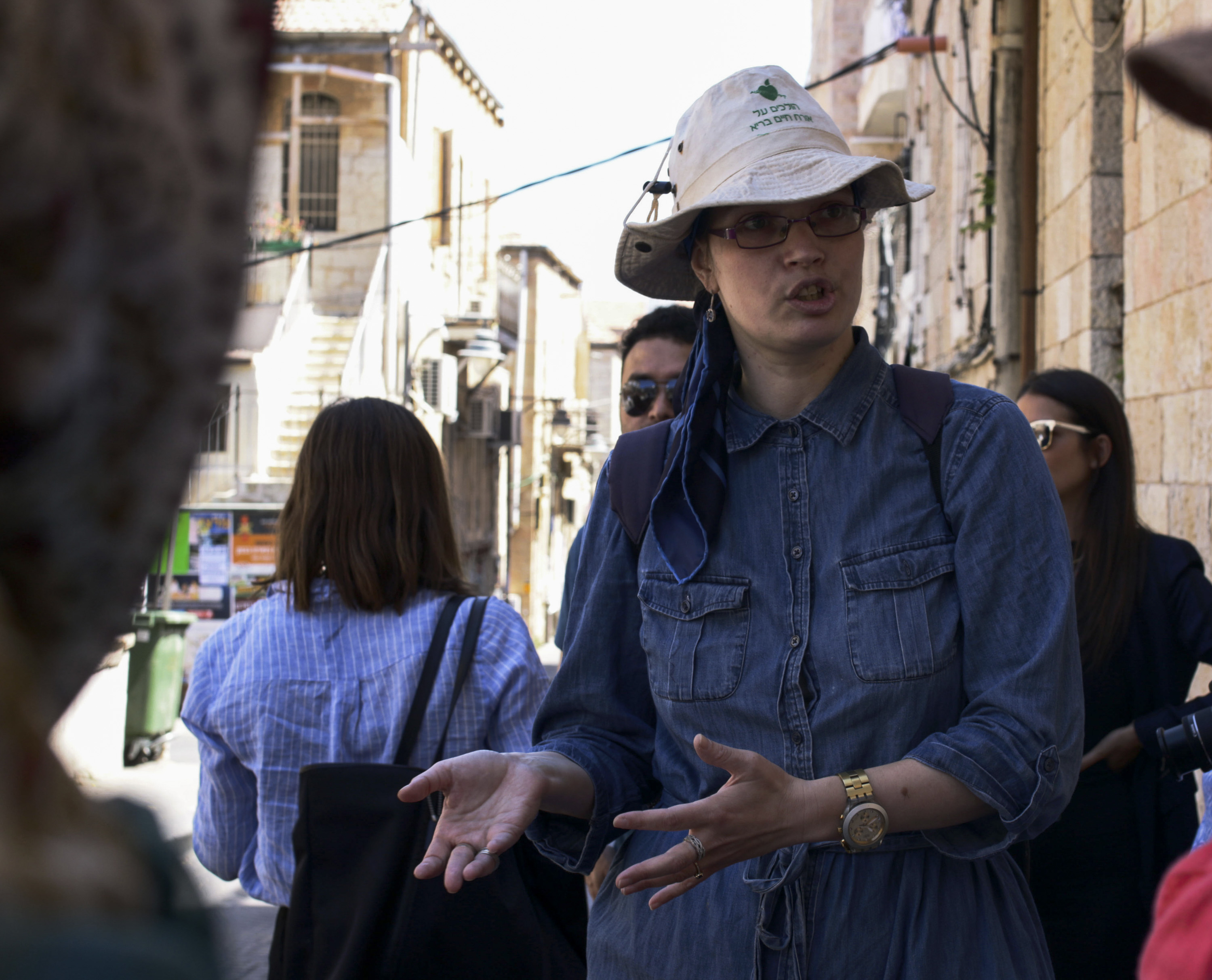 Tzyppil Yron, a contributor of Mishpacha magazine shows a group of American journalists around a Haredi neighborhood in Jerusalem on June 5, 2017. Photo by Tsering Gurung

“Women are less likely to find marriage partners if they carry the gene,” said Dr. Naomi Marmon Grumet of the BRCA gene mutations that often lead to breast cancer.  Ashkenazi Jews have a 1 in 40 chance of mutations compared to the 1 in 800 chance of the general population, according to the Centers for Disease Control.  Women with a family history of breast cancer can be tested to assess their risk, but this means addressing a problem few will talk about.

A fierce women’s health advocate, Grumet searched for a way to help Haredi women see the signs for themselves, but in a way that would not offend their religious leanings.  She found her solution in Corrine Beaumont’s “Know Your Lemons” campaign.

“It was as if it had been specifically designed for Haredi women,” she said.  The ad shows a carton of lemons with dimples, bumps, discoloration–all the signs of breast cancer.  Grumet printed the image on flyers with information about cancer and resources.  She kept “breast” out of the title but explicitly addressed it in the document. 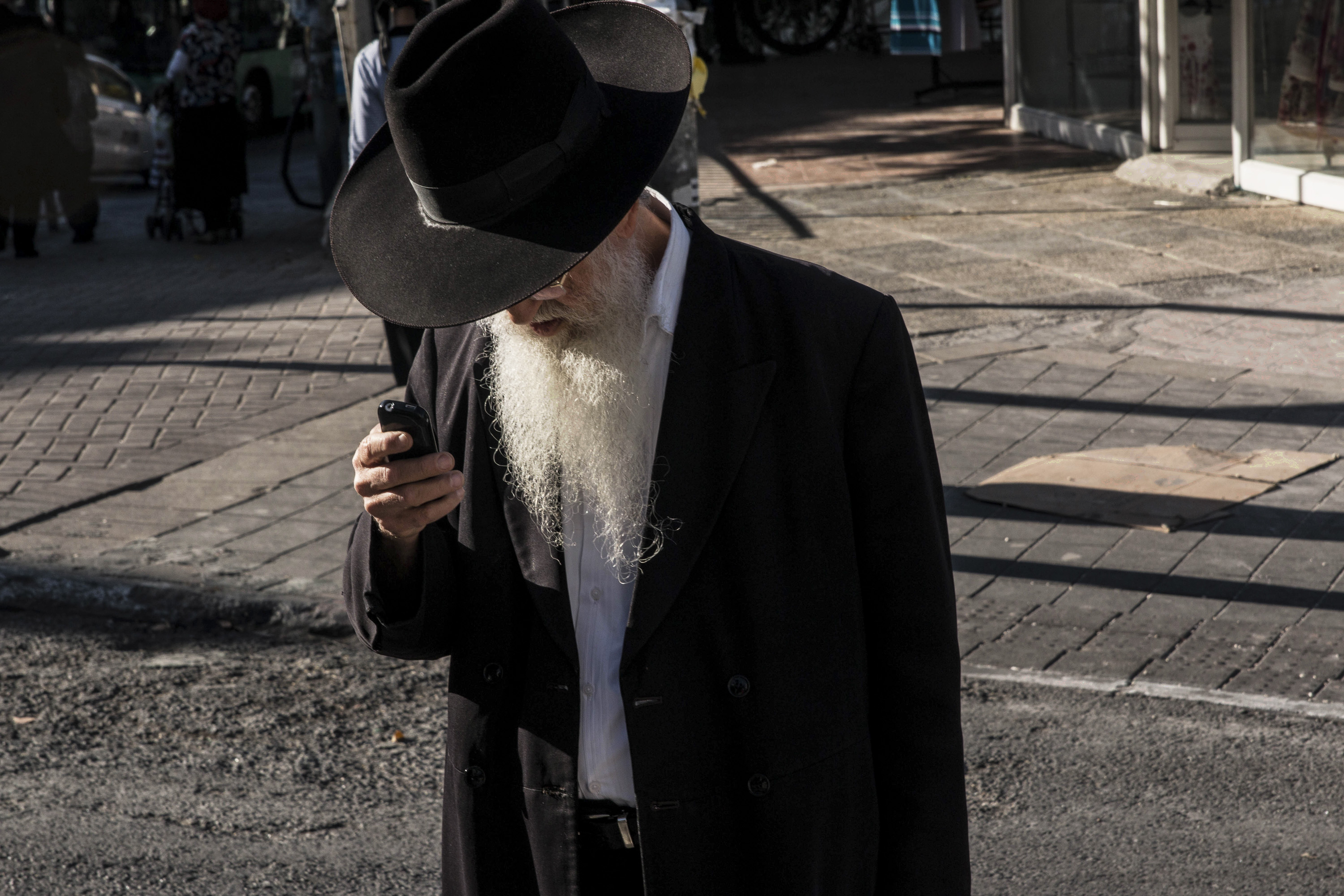 A Haredi man checks his phone in his neighborhood of Mae Shearim on June 13, 2017. The Haredi community is very slowly technologically advancing, but communication around women's issues remains an issue. Photo by Kate Ryan 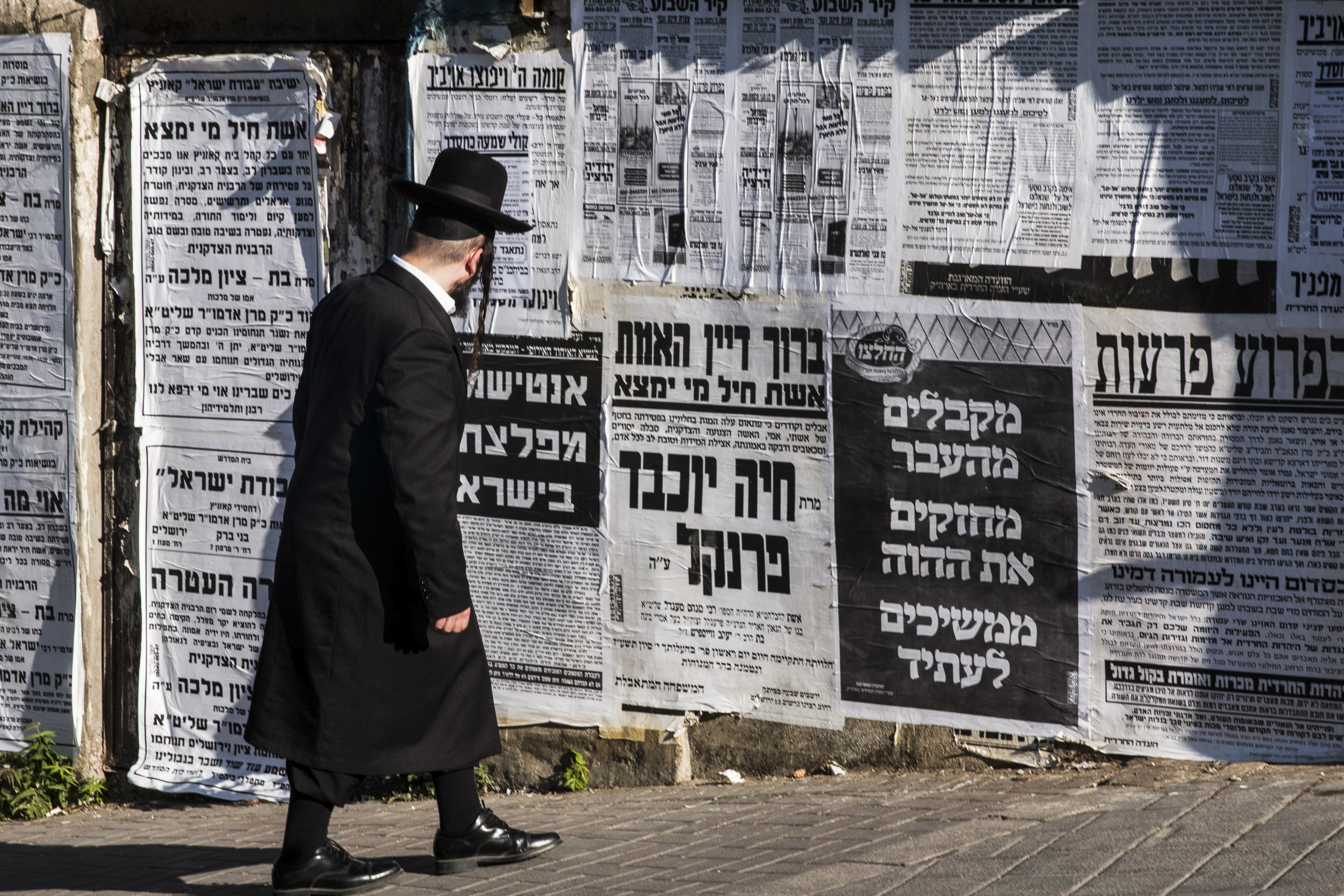 A Haredi man in Mae Shearim reads the pashkevilim to get his news updates on June 13, 2017. These black and white printed signs are the main news source for the community. Only words that are considered religious may be printed. Photo by Kate Ryan

The posters hang in mikvahs, the ritual baths where women go after their monthly menstruation ends.  This is a time of great vulnerability, Grumet said, because it occurs around ovulation when women are considering whether to have more children.  They are also conscious of their bodies’ shapes and imperfections.  She said 780,000 Israeli women across the religious spectrum use mikvahs, and their first line of defense may be the 1,000 to 1,200 mikvah attendants who assist them there.

Through her organization The Eden Center, Grumet has trained 250 mikvah attendants to recognize signs of breast abnormalities and abuse and to refer women to doctors, crisis centers and hotlines.  The attendants not only look for physical signs of abuse but also focus on emotional cues.  Is the woman making eye contact?  Does she hide parts of her body?  Does she linger and avoid going home to her husband?

“Most women look forward to being intimate with their husbands,” said Grumet, noting that Haredi couples refrain from sex during menstruation.  Avoiding home is a red flag.

Mikvahs may be female spaces, but rules are determined by male rabbis.  Grumet has to convince the local rabbinate of each mikvah that her initiatives are beneficial and do not infringe on the spiritual purpose of the baths. In fact, addressing abuse encourages healthy relationships and intimacy, which is at the core of the bath’s purpose.

“Before people would say, ‘That doesn’t exist here,’” said Grumet. “There is at least a discussion now.”

To Grumet’s surprise, religious leaders pushed back harder on breast cancer education.  Rabbis asked her what cancer had to do with a couple’s intimacy and insisted that the mikvah was not the right place to discuss it.  Grumet replied that a woman who does not detect her breast cancer may not be around to have relations with her partner and that it has everything to do with intimacy.

Initiatives like Fleishman and Grumet’s, while unthinkable just a few years ago, are already saving lives.  But their impact will remain limited without a public conversation and female representation in politics.

When Pnina Pfeuffer decided to run for the Jerusalem City Council, she was told she was insane, not Haredi.

“Haredi women are not involved in politics at all, not nationally, not in any municipality,” said Pfeuffer.

On paper, Pfeuffer has the legal right to join one of the two Haredi political parties.  In reality, no woman has ever been admitted.  So she plans to run as a member of the Yerushalmim party, which focuses on quality of life issues like health care, cost of living, education, and gender equality.

“I want these conversations to feel ridiculous in the next ten years,” Pfeuffer said.  “The question of whether to address sexual assault, to be open to alternate political views, these issues should be a no-brainer.”